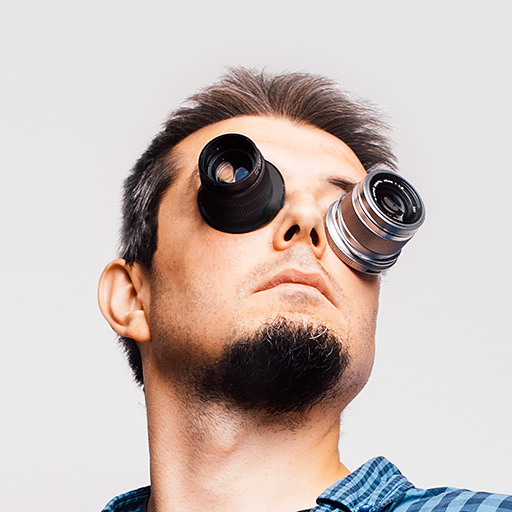 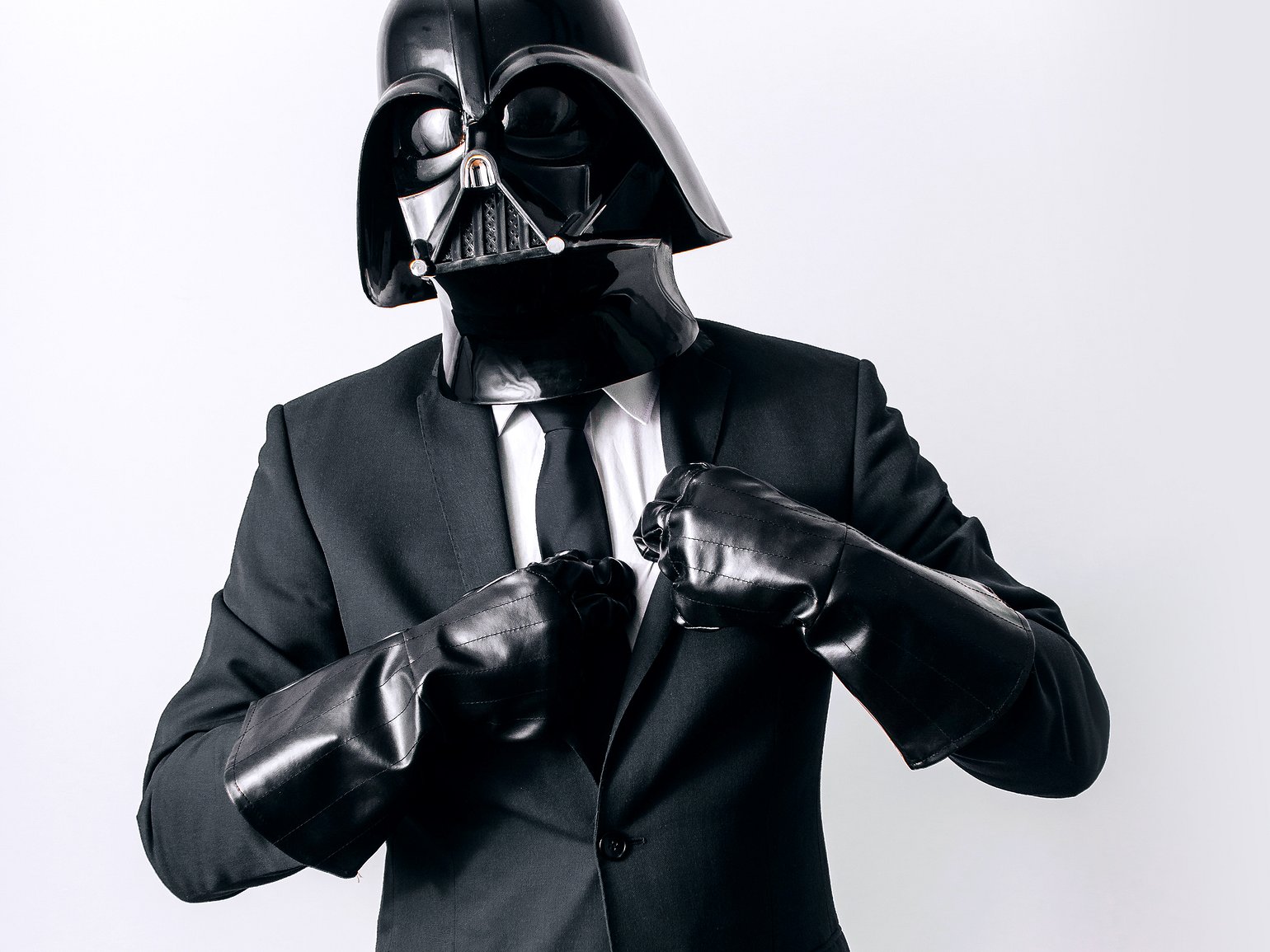 You know that feeling when you move to a new apartment and you close the door to the old one for the last time? Your life moves on. It’s probably going to be much better.

But still — it’s hard to say goodbye to that old apartement. It’s just some walls and furniture and yet some of us even shed a tear when leaving the old flat. It’s full of great memories.

Where did you get the idea for D. Vader project?  — This is probably the most frequent question I get. So let me answer it here.

I’ve been running so called 365 projects for almost three years now. I started my first one on August 14th, 2013. It was a typical 365 project. Nothing special. I wanted to learn about my camera, lighting and framing shots. I took photos of my everyday life and people important to me. Everyday I published one, carefully chosen photo taken that day.

After 365 days there were exactly 365 photos published. Not a single day missed. I got literally addicted to my camera and daily photo taking. I got so into it thatin October 2014 I launched tookapic.com — a site for people to run their own 365 projects.

I’m still doing my 365 project on tookapic today. I’m now somewhere in the middle of my second year. The photos I take are pretty much random. There is no theme. And I wanted a theme. I wanted something new, completely fresh. I had quite a few ideas.

One of them was portraiting movie characters in everyday situations. But while it’s easy to imagine a positive character doing mundane tasks, it’s much harder to imagine a villain doing the same. I started browsing rankings of movie villains and Darth Vader was always in the top 3. That’s it — I thought. I bought the mask and the gloves the next day.

I’m often asked who’s behind that mask in my photos, where my studio is, how many people were involved in the project? Well, it’s me in the mask, I was the only one involved and as for the studio — it’s just one of the rooms in my house.

It’s been more than 2 years since I shot with a DSLR. All of my D.Vader photos were taken with a mirrorless camera. A micro 4/3 Olympus OM-D E-M5 (Mark I). Most of the pics were taken with M.Zuiko 17mm f/1.8.

For lighting the scene I use a single strobe – Quantuum Move 400 – which is way to powerful for my needs. To diffuse the light I just used a big sheet of thin fabric – way cheaper than a softbox.

It may seem easy. Just set up the light, put the camera on a tripod, put on the mask and press the shutter button. But in reality “making” a single D. Vader photo took somewhere between 30 minutes and few hours. And there was no space for excuses. I had to do it every day.

I don’t have remote for my camera. To shoot all those selfies I had to use self-timer. Every time I had only 12 seconds from pressing the shutter button to the photo being taken. 12 seconds is not that much. Especially when I had to put on the mask, the gloves and pose in the way I imagined before. Some photos required 3 takes. Some required 33 takes. And there were probably a few with more than 50 takes.

This thought me that a photo should be “already taken in my head” long before I even start building the scene. The better I knew how the final image should look like, the fewer takes it required to capture.

Pretty much every day of the project was exhausting. But at the same time every single one was very rewarding. I learned a lot about building a scene, setting up the lights, photo manipulation and retouching. It was worth it.

I admit, I used Photoshop a lot. But hey, the results are pretty nice, so why not. And besides that, it helped me learn a lot about PS features I didn’t even know about before.

Ok, but showing you the making of the series is not the real purpose of this article. What I really want to write about is my comfort zone. Or rather getting out of it.

I sent the D. Vader gallery to Mashable’s editor late at night on November 17th. The next morning the article about my project was already getting on top of the popular list.

Bored Panda immediately put the gallery on their homepage, even though they didn’t like it that much when I sent them the photos few weeks before.

My phone started to ring. I started to get emails. Not one, not two. My mailbox was receiving few messages every minute. I was getting calls from TV and radio stations. Some of the biggest newspapers and online magazines suddenly wanted to talk to me.

And here’s where the comfort zone comes in. A friend wrote to me on Facebook – I’m surprised that you even bothered. And here’s the thing – I really didn’t. I so did not feel like answering all those calls and emails. I can’t remember the last time I wanted to say “screw it” so much. But I did it anyway. And it might be one of the best thing I ever did.

If it scares you, it might be a good thing to try – Seth Godin

I didn’t feel like doing it. I thought to myself – Screw it. Do you really need it? You don’t. Have a beer instead, relax and forget it. On the other hand I knew that this might be the once in a lifetime opportunity to experience something like that.

Couple of TV crews visited my office the same day. I gave them a short interview. Unshaved and unprepared. But I did it. My first experience with a TV camera and a bright light pointed straight at my face was… stressful to say the least. I had no idea what I was talking about until I saw myself on TV that day.

I got two calls the next day. Both from producers of two most popular morning shows in Poland. They both tried to convince me to appear on their show first. It was a weird experience. Weird, but nice.

Another TV crew came to our house in December. They wanted to shoot some footage for one of the morning shows I was going to appear on. They stayed for 3 days and were filming from 8am to late evening. Again – exhausting, but very nice experience.

It turned out that TV camera is not that scary at all. It turned that TV people are actually doing their best to make you look good rather than to humiliate you. And editing… you can do magic with good editing.

After three days with the TV camera pointed at me, showing up on live TV wasn’t that scary. I also got invited to a live show to one of the local radio stations. Instead of being shy and refusing, I went for it. Gave a short interview. And it was good. I heard myself in the radio when driving to work the other day. I remembered I gave another interview via telephone few days before that. Another weird but nice experience.

D. Vader kicked me out of my comfort zone so far, that I’m now having trouble finding the way back. And you know what? Deep down, I honestly hope I won’t find it.

One day after the project went viral I spoke to the guys at Brand24 to help me set up their tool for monitoring the buzz around D. Vader. 20 minutes later I was already gathering data.

Social media reach passed 12,000,000 last month. And there are still people talking about that D. Vader today. Pretty good for a guy from north-eastern Poland.

The project got most of attention in November last year. During that month I received more than 500 emails asking for permission to use my photos, feature my work or appear on TV/radio. I got more than 300 new followers on Twitter, over 1000 people joined me on Facebook and more than 3000 started following me on Instagram.

I appeared on four different TV shows (including one live) and two radio stations. My photos were featured in newspapers and magazines all over the world.

Since I ran D. Vader project on tookapic it was great opportunity to see how viral marketing works for a site like this. 40% of all users since the launch visited our site in November. We passed 1,000,000 pageviews a month for the first time. It was also the first time our servers had trouble to withstand the traffic. It was a pretty good month for tookapic.

I’m often asked if I plan another project like that. Well… I don’t. No more photos of villains in everyday situations. I also think that it would be really hard to beat what D. Vader did. Nothing is impossible, but I’m not going to try beating that. I’ll just keep doing my thing.

And by my thing I mean tookapic. There are already new, creative projects showin up there. One of my favourites is the Lego Project by Michał Kulesza, which recently got some attention as well.

What did I learn from the D. Vader project? Trying new things pays off. If someone told me 3 years ago that thanks to my daily photo project I will appear live on national TV and reach more than 12,000,000 people I would’ve probably just shrugged and smiled.

So if you haven’t yet – now is the good time to start your own 365 project. Who knows how will this change your life.

Start your own photo project

Improve your photography, unleash your creativity and boost your self discipline. All that with a simple photo challenge. Give it a try for a week.
Sign up now
© 2020 by Tookapic. All rights reserved. Made with love in Bialystok, Poland.